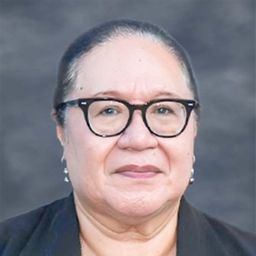 Hon. Fekitamoeloa Utiokamanu acquired the academic qualifications, professional experience and record of achievement that earned her appointments to increasingly important positions in the Planning, Finance and the Foreign Service of the Tonga government. During her 15 years as the Deputy National Authorising Officer/Deputy Secretary for Foreign Affairs, she managed the development programme of the Vava’u Group of islands and she drew on that formal training and learning as a practitioner to achieve a series of successes in building capability and improving policies.

Her early career took her to five years service as Macroeconomist and then as Planning Officer in the Central Planning Department. she took the lead in preparing project and program development with aid donors for implementation in Tonga. She also spent a year as Acting Deputy Secretary for Finance and was instrumental in budget preparation and budget policy development.

Hon. Fekitamoeloa Utiokamanu was appointed to the position of Deputy National Authorising Officer/Deputy Secretary for Foreign Affairs in 1991 and took over the management of the EU program in Tonga which was focussed primarily on the development of the Vava’u Islands, but with significant allocations for the rest of the country under the non-focal component of the programme.

In 2002, Hon. Fekitamoeloa Utiokamanu was appointed to the position of Secretary for Foreign Affairs & National Authorising Officer, in which position she managed the transfer to the ministry of the immigration department, a task that she successfully completed. From February 2005 to 14th April 2009, she was appointed to be the Permanent Representative of the Tonga to the United Nations and the Ambassador to the United States of America, Canada, Cuba, and Ambassador to the Bolivarian Republic of Venezuela.

In April 2009 to April 2015, Hon. Fekitamoeloa Utiokamanu served as Deputy Director General, Secretariat of the Pacific Community and OIC of the Suva Regional Office. In January 2010, she also took on the responsibility of Director of Education, Training and Human Development Division directly supervising five main programmes including (i) Secretariat of the Pacific Education Assessment Board (SPBEA); (ii) Centre for Community Education Training (CETC); (iii) Human Rights Programme (RRRT); (iv) Human Development Programme covering gender, youth and culture; and (v) Regional Media Centre (RMC). she is also a member of the Pacific Islands Forum Secretariat’s Reference Group on Sexual and Gender Based Violence; co-chair the working Group on 1325 Women, Peace, and Security; Steering Committee on the UNDP Pacific Operations Centre; PIFs Working Group on Human Resources Development; Chair of the PIFs Working Group on Population & Health; a member of the SPC Human Rights Programme External Advisory Board and Deputy Pro Chancellor & Deputy Chair of the University of the South Pacific Council.

From April 2015 to December 2015, Hon. Fekitamoeloa Utiokamanu served as Acting Pro Chancellor and Chair of the University of the South Pacific Council. she also assumed the Chairmanship of the SPC Human Rights Programme External Advisory Board. From July 2015, she became a Director of a Consulting Company, ‘Utoikamanu & Associates. She was appointed Chief Executive Officer of the Ministry of Tourism on the 3rd January 2017.