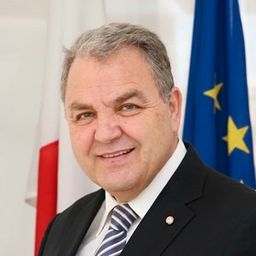 Dr Farrugia first entered Parliament in 1996, and was re-elected in 1998, 2003 and 2008. Between 1998 and 2008, Dr Farrugia was the Shadow Minister for Justice. In June 2008, he was elected as the Labour Party’s Deputy Leader responsible for Parliamentary Affairs, and served for five years as the Opposition’s Shadow Minister on Employment and Workers’ Rights.

Dr Farrugia headed the Maltese Parliament’s delegation to the Parliamentary Assembly of the Organisation for Security and Co-operation in Europe (OSCE) between 1996 and 1998, and served as a member of the delegation since then till 2008. He has travelled abroad on a number of EU and OSCE missions as an international observer during the holding of various elections, including the ones in Georgia (1999), the Presidential Election in Palestine (2004), the US Presidential Election in 2004, the Montenegrin Independence Referendum (2006) and the Presidential and Parliamentary Elections in Zambia (2006).

Prior to entering politics, Dr Farrugia moved up the ranks within the Malta Police Force from 1977 to 1996, leaving the Force in the rank of Police Superintendent. During this period, he graduated as a lawyer from the University of Malta.

On 13 February 2014, Dr Farrugia was decorated with the Grand Cross of the Order of Honour (Greece) by the President of the Hellenic Republic, His Excellency Karolas Papoulias.

On 15 April 2015, Dr Farrugia was decorated with the Grand Cross “pro Melito Melitensi” (Sovereign Military Hospitallier Order of St John of Jerusalem, Of Rhodes and of Malta) by the Prince and Grand Master of the Sovereign Military Order, HMEH Fra’ Matthew Festing.

On 19 February 2016, Dr Farrugia received the PAM 2015 Excellence in the Mediterranean Award.

The following publications have been issued by the Speaker's Office:

Dr Farrugia was born in Mosta, and is married to Carmen née Zammit. They have a daughter, Caroline, who is a Magistrate at the Maltese Courts of Law, and two granddaughters Annamaria and Elena Marie.